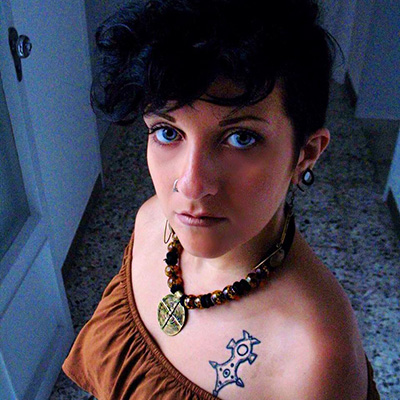 Sara Di Bella (Italy, 1986) started her musical studies at a young age playing the piano, at the conservatory A.Scontrino in Trapani. She then started her vocal studies, resulting in a Bachelor Degree in Opera, collaborating with the Clementi Award Winner Antonio Piricone as assistant supervisor, graduating with 110/110. She has a Bachelor Degree in Musicology at Palermo University, passing grade of 110/110 and honours. In November 2015 she received a Master Degree in Musical Performance at the Royal Irish Academy of Music (Trinity College – Dublin) with Sylvia O’ Regan.

In 2012 she was on tour with the JSB Ensemble of the International Bachakademie (Stuttgart) singing J. S. Bach’s B minor Mass under Helmut Rilling.
She’s an active member of the Irish vocal group Anúna since 2012 and has toured Canada, Holland, Belgium, Canary Islands and Japan with them. In Japan in 2014 she performed – in Japanese – the main theme of the Miyazaki movie Princess Mononoke. In May 2015 she was involved in the project Responses to Pierrot Lunaire featuring pieces from Schönberg’s Pierrot Lunaire and new pieces written by composition students of the RIAM: all performed with Anúna. In September 2015 she was part of the project “Electrica Carmina Medievalia” with Gianluca Lastraioli performing medieval pieces with rock instruments (two electric guitars, bass guitar, keyboard and drums). In 2017, Anúna performed the premiere of Yeats’ “At the Hawk’s Well” in collaboration with Nō theatre and Rokuro Gensho Umewaka (Japanese Cultural Heritage), at the Bunkamura Orchard Hall (Tokyo).

In 2014 she performed the main role in Janáček’s opera The Cunning Little Vixen in Samuel Beckett’s Theatre in Dublin (RIAM production). In March 2015 she was applauded as Suor Genovieffa in Suor Angelica’s RIAM production in the Abbey Theatre (Opera Magazine : “—and Sara Di Bella as a chirpy, independent Genovieffa”).  https://dibellasaramusique.wixsite.com/dibellasaramusique