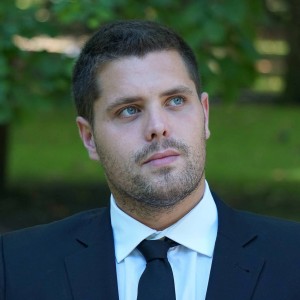 Manuel Quintana Aspra (Spain, 1988) is a member of the Oviedo-based choir “El León de Oro” (LDO) and also of the choir of Oviedo’s Opera Theatre. He has completed studies of violoncello at Oviedo’s Conservatory of Music (CONSMUPA).
With the choir LDO he won several choral competitions, both national and international, such as the Grand Prix Città di Arezzo in 2008, which took the ensemble to the finals of the European Grand Prix, held in Tours in 2009. In 2014 he also won the first prize in the I London International A Capella Choir Competition. He won the first prize in Torrevieja’s international choral competition and, together with LDO, was awarded the Guidoneum Award 2011. Recently they took part in Maribor’s international competition, where they got the second prize, and in Tolosa’s International competition, where they were awarded with two second prizes.

In 2013 he took part in a project with Europachorakademie, a Germany-based international choir, where he performed in Frankfurt Mahler’s 8th symphony “of a Thousand” under the conductor Paavo Järvi and recorded a DVD. In the spring of 2015, as a milestone in his career, he sang the 40-part motet Spem in alium by Thomas Tallis in the Semana de Música Religiosa de Cuenca, together with The Tallis Scholars under their conductor Peter Phillips.