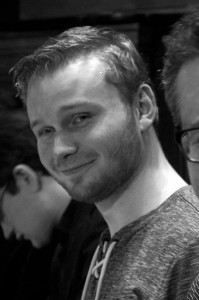 Albert Jan de Boer (the Netherlands, 1992) started singing with the Martini Boys’ Choir at the age of 7. After a year of Basic Music Theory Lessons from Bouwe Dijkstra, he received 4 years of piano lessons at the music school.  After this he studied music theory and church organ as well as piano with Rein Ferwerda.  He then continued his piano studies with Anastasia Goldberg at the Prince Claus Conservatoire in Groningen, where he is currently doing a BA in Music in Education.

In addition Albert Jan is active as an ensemble singer.  He is a permanent member of the Roden Boys’ Choir en sings in many project choirs.

In 2013 and 2014 he joined in with Meesters & Gezellen. In 2014 Albert Jan also participates in the Tenso Europe Chamber Choir, a summer school organized by Tenso Network Europe, also under the direction of Kaspars Putniņš.