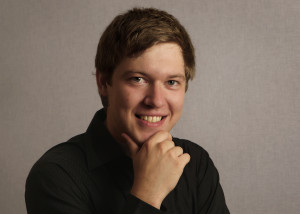 Matija Bizjan (Ljubljana, 1988) began singing in primary music school, taught by professor Matjaž Robavs. In 2010 he was the solo singer in the Monteverdi’s Vespers, performed by the students of the Academy of Music in Ljubljana. In 2011 he enrolled at the Academy of Music in Ljubljana, where he is currently finishing his third year in Matjaž Robavs’ class. Since January 2011 he has been regularly cooperating with the Slovenian Chamber Choir as a choir singer and also as a solo singer. In November 2012 he toured with the choir, Ana Netrebko and the Slovenian Philharmonic Orchestra, with which he did ten concerto performances of the opera Iolanta by P.I. Tchaikovsky in several of the most prestigious concert halls in Europe. In april 2013 he debuted in The Slovenian National Theatre Opera and Ballet Ljubljana as Caronte in Monteverdi’s Orpheo. In november 2013 he gave a recital in Slovenian Filharmonie; in February 2014, he was a soloist in Charpentier’s Te Deum in Ljubljana and Ptuj.